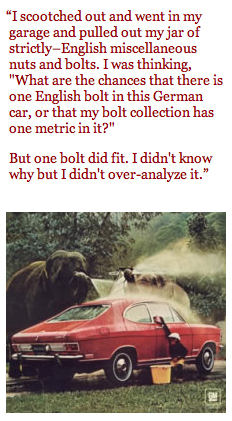 This Opel was a ghostly silver-grey—at least, what was left of the paint. Twin carburetors. Sportly little thing—sort of—when you could keep it running—the engine would die when you stepped on the brake. So you had to keep your foot on the accelerator at all times, especially while braking. Turns out it had a leak in the break- assist diaphragm, which caused it to be constantly, and audibly, sucking excess air—and making a proper tune-up impossible. But we couldn’t afford to get it fixed. But then, we couldn’t get parts even if we’d HAD the money.

Finally, to make it die less often, I set the low idle way up. WAY up. Our friends and relations always heard us and knew it, if we were approaching their home. They’d recognize the sound of a lawnmower running on high, coming up the street. Our twin carburetor, Opel Kadett, riding lawnmower.

We had no sooner bought the thing than one day, driving rather slowly over a speed bump in the Married Student Housing parking lot, we came to a screeching halt. Getting out to investigate, we found one tie–rod had broken loose and the right front wheel was facing sideways.

Repair parts were rare, so my dad’s good ol’ family mechanic, Clare Brumwell, gave the project of fixing it to his teenaged son, Clare Jr.

Clare Jr. proceeded to turn down custom parts on the shop lathe, creating custom shafts, bushings, threading shafts, turning flanges, making nuts to match the special threads, and adapting what parts he could find here and there. It took him 4 weeks to completely rebuild the front end. But he got us running again, and his old man charged us $100 for the work. Said the project had kept his boy out of trouble. Plus he wanted to help out a couple newly-weds.

After that, the Opel did steer OK, but it was a real trick to drive. And something about the transmission made lots of noise.

Picture what it took to drive, then, since…

It would pop out of 2nd gear, so if you were in 2nd you had to hold it in.

If you stepped on the brake it would stall unless you also gave it some gas.

And the defroster didn’t work. The defroster was a roll of paper towels on the passenger seat.

Oh, and the visor wouldn’t stay up. You kind of held it up with your head.

I have a vivid memory of one particular trip—taking clothes to the laundromat on a cold Oregon Winter’s day. Basket of clothes on the passenger seat, and bag of clothes stacked on top of that, and the roll of paper defroster towels stuck handily between the laundry basket and the shift lever—I’d thought maybe the paper towels crammed in there might help hold it in second. And off I went.

So imagine, on your way to the laundromat, you come to a corner with a yield sign where you have to turn right…

You momentarily stop wiping the windshield as you go, and turn on the turn signal with your left hand and hold it in the click position, shift the car down to second gear and hold it in second with your right hand, and as you turn the car to the right–with whichever hand seems less busy at the time—you prop up the laundry with your right elbow.

Oh yes, the new skill I had to learn on this trip, was you also had to find a balance between propping up the laundry basket with your elbow, versus letting its mass push on the roll of towels helping you hold the stickshift into 2nd. It works well for that period when it’s leaning—on a right turn.

Now then, you step on the clutch with your left foot, downshift and hold, let lean, and then let out the clutch out as tolerated by the engine, while pressing the break with your right heel—and you listen to the engine speed and just before it dies, you give it a little gas with your right toe.

Whatever you do, don’t let the grinding sounds in the transmission distract you, or the freezing rain on the street discourage you. And don’t complain about having to hold up the visor with your head since you’re leaning forward anyway, trying to see through the foggy windshield—but don’t lean too far forward and breathe on the windshield or you’ll be constantly wiping with a paper towel.

Turn right, and then go back to steering and wiping the windshield. Go a couple blocks and then turn left into the laundromat parking lot.

Left turns are easier somehow, because, if you need to, you can always see out by rolling down the driver’s–side window as you approach the turn, and looking out that way. Plus you don’t have to hold the laundry up with your elbow since it’s tilting away—against the passenger door. Oh yes…no danger of the laundry falling out because the passenger door is duct–taped shut.

Well, I made it to and from the laundromat without incident, but after that we bought a beat-up old washer and dryer for home—it was cheap and it was far easier for me to wire up the rental house for 220 to run the dryer, than to fix the car.

After a couple years of blessed first–car ownership we’d saved enough money to buy a better car, and we advertised the Opel for sale. It was late Spring, so the time was right. Fellow came over. I showed him what was required to drive the thing. He seemed unconcerned.

“How much are you asking?”

We took it for a spin around the block, with him driving and me riding and praying. When we got back around to our street he’d forgotten which house was our house and he zipped past our driveway. I said, “Ooops, you missed it.” He stopped and threw it into reverse, gave it a little gas, and…screech, clunk, scrape. We stopped dead.

We got out and looked under the car. The driveshaft had crashed to the pavement, and also it was laying across the rear brake cables, stretching them tight as a fiddle string—and thus applying the brakes.

Just think, if the driveshaft hadn’t applied the brakes like that, then we would have dragged and gouged the street more than it had, before we’d gotten stopped. Anyway…

I was pretty sure the fellow wouldn’t buy the car at that point, but he was very helpful, and he helped me jack up one side of the car, there in the middle of the street, crawl under, and have a look.

It seems that there was a little squarish bracket that was supposed to hold up the driveshaft, and that this bracket was to be held up by a single bolt—and that this bolt was no where to be seen. I tried lifting up on the drive shaft. Too heavy to even begin to lift it.

I scootched out and went in my garage and pulled out my jar of strictly–English miscellaneous nuts and bolts. I was thinking, “What are the chances that there is one English bolt in this German car, or that my bolt collection has one metric in it?”

But one bolt did fit. I didn’t know why but I didn’t over–analyze it.

The prospective customer got the tire jack out of the car he’d arrived in, and together we used it to jack up the drive shaft—and we bolted the bracket back on. Holding my breath, we let the jacks down, fired up the Opel and took it for a spin.

“Wanna buy it?” I ventured, certain he’d laugh at me.

Once in a while I used to see—and hear—him, toodling around town, in that little Opel Kadett, happy as a clam, one hand holding the stick shift, with the visor propped up on his head.

This entry was posted in First Car, Opel Kadett and tagged Opel Kadett. Bookmark the permalink.