Growing Up In Petty Country
By Valerie Garner

As a child of the 60s in a conservative small town in North Carolina, I missed out on the flower child experiences of big-town living. My non-conforming years, much to my parents’ chagrin, revolved around “hot cars“ and “hot guys.” What did they expect with Richard Petty living just down the road in Level Cross?”

If you were not a guy with a hot car then you wouldn’t get the time of day from me. I missed out on some great guys that way but hey, what did I know then – everything I thought.

My first car was a 10 year old ‘57 Chevy Bel Air coupe purchased for $750. The horror, my mother must have felt, as her “princess” daughter tinkered with a greasy carburetor, black taped a “mean grill”, and added fender skirts, spinner hubcaps, and half-moon chrome headlight covers. My boyfriend at the time inserted “spacers” in the front springs that made it look like it was going to rocket to the moon. It rode like it was on a train track. It was literally a “pain in the neck” as it forced me to strain to see over the hood while cruising into the “Toot ‘n Tell“ drive-in. All was right with the world. I was turning boys’ heads and that’s all that mattered. Who’s that cool chick? That can’t be a “girl’s” car!

Needless to say after all that tinkering, I had a small accident and was forced by parental pressure to sell the car. I’ll skip over the boring ‘59 black Batmobile Thunderbird and go straight to the love of my life. Secretly, I must tell you that I still dream about my first new car.

In mid-1967 at Lyle’s Chevrolet in High Point, North Carolina, they knew me well. Mr. Lyle could expect a parooze of his showroom whenever I spotted a change in his display. The first Camero was just being introduced in mid 1967. I planned to order one, but I couldn’t wait for a happenstance delivery. On my tenth trip to Lyle’s, debating the color to order, I walked out the door with the salesman just as a Driveaway car carrier pulled up. At that moment, my heart stopped. I swear it did. Even today my fingers sweat just recalling that moment. Looking up on the top ramp of the huge car carrier, I saw it. It seemed to be suspended in midair. It was my dream car – a buttercup yellow 1967 Camero. Not only was it the right color but it was “loaded.“ It was a Super Sport with a 350 cubic inch engine. It had a black vinyl top, red-line tires, a custom interior, four-on-the-floor, and headlights that opened and closed (a Tim “The-Tool-Man” Taylor grunt here). The salesman’s keen eye detected a sure sale to this visibly-shaken spit-curled platinum blonde female. He had already begun to count his commission as he had the truck driver stop “my Camero” exactly at the bottom of the truck ramp. He cranked it up for me to drive. Now I had driven my boyfriend’s 1960 Impala straight drive three-speed on-the-column only a few times. Amazingly, however, the four-speed knob melded with my hand and synchronized easily with clutch foot action. I took her for a short spin after the salesman said it needed to be “prepped” and I‘d better not push her too hard.

After a half-hearted price negotiation at $3,600, I was rewarded with a half tank of Sunoco high-test gasoline at 35 cents a gallon. We came to an agreement that they could display their first “hot” Camero for a few days. Those few days were agony. I came to get her early – I couldn’t wait another minute. There was a horde of people encircling my car, touching it, putting their fingerprints on it …oh, the inhumanity!

The salesman reluctantly gave me the keys and to the dismay of those gathered in admiration, I drove off the lot changing gears like I had been born with a stick shift in my hand. Arriving back at work, I parked it right at the front door where everyone driving by could see her. I spent the rest of the day immersed in sinful pride, watching people doing break-neck double takes and repeating to myself, “that car is mine!”

She didn’t stay “stock” for long but that’s a story for another day. 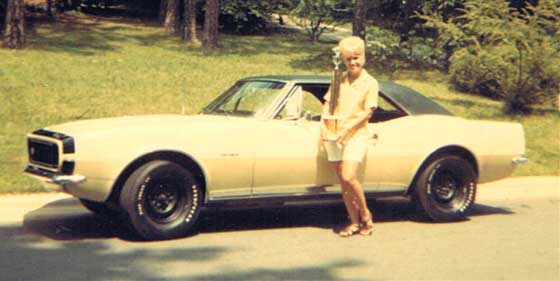