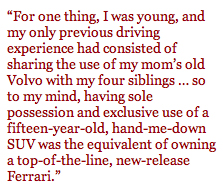 Jackson, the namesake of my childhood idol and infamous 80’s pop icon Michael Jackson, was my first love – er, I mean, car.

Oh, but I did love that sexy hunk of metal. Speaking of 80’s pop icons, I should mention that this gold, 1990 Toyota Forerunner had previously been named “Buck” by my father, its original owner. In recognition of the fact that I renamed this car after an 80’s pop icon, it is fairly safe to speculate that “The SUV formerly known as Buck” would have been a perfectly acceptable alternative name to Jackson.

My father gifted Jackson to me in December 2005. A senior in college at the time, attending Fairfield University in Connecticut, I had wished for some time that I could move to San Francisco after graduation. However, I had adopted the misconception that living in San Francisco sans car was just not possible. Operating under that fallacy, I had long since abandoned my dream of living in San Francisco and had settled on Plan B, moving to New York and pursuing a back-burner pipe dream of being discovered as an actress.

I would like to disabuse readers of two incorrect assumptions that may have been born of your perusal of the paragraph above: 1) it is actually not impossible – although neither is it easy, I would imagine – to live a carless existence in San Francisco; and 2) I do not have any acting experience, or any such talent of which I am aware, nor had I any well-laid plan as to how I would be discovered…other than possessing a naïve college student’s belief that New York was overpopulated with meandering talent agents scouring the city endlessly, contracts in hand, for prospective clients to cast in Broadway plays, TV shows, and movies.

Accordingly, the very moment I unveiled the keys to Buck, which had hitherto been enshrouded in Christmas wrapping paper, I ditched my plan of being a New York actress and resumed the path of being a psychologist in San Francisco, where I now live and practice as an attorney.

To state the obvious, I was not so clear at the age of 21 about what my future would hold. Two things I knew for sure, though, were that Buck rocked and that he must immediately be renamed Jackson. As I picked up my friends that night, with “Wanna’ Be Startin’ Somethin’” blasting through Jackson’s carriage, I counted myself among the luckiest people in the world.

For one thing, I was young, and my only previous driving experience had consisted of sharing the use of my mom’s old Volvo with my four siblings … so to my mind, having sole possession and exclusive use of a fifteen-year-old, hand-me-down SUV was the equivalent of owning a top-of-the-line, new-release Ferrari.

Never mind that within a few months of my taking ownership and having Jackson shipped to me in Connecticut for my final semester, this beauty would begin to break down during traffic stops and cause me to deliver no end of road-rage-inspired profanity. Never mind either that problems with my new Ferrari-esque wheels caused repair shop owners to quote me large sums of money for their services.

All I knew was that my car was perfect … my Pretty Young Thing.