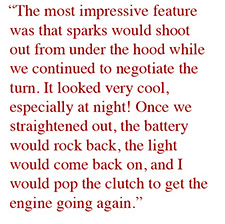 A person’s first car usually holds a special place in their heart. Mine is no different. As a senior in high school having a means of transportation meant a certain element of freedom.

My first car was a 1964 Pontiac Lemans. Bought used for $450 is was the most beautiful vehicle I’d ever laid eyes on. Bucket seats and a three-speed on the floor made it a lot of fun to drive.

The only problem was that here in North Dakota winters can get very cold, which this vehicle did not always like. Cold morning starts were tough. To facilitate dealing with a stubborn engine I solved the problem by having two batteries. I kept one inside to keep it warm and if my car didn’t start I just swapped out the cold battery for the warm one. This worked great but was a bit clunky if you didn’t have any tools. To speed things along I usually didn’t clamp the battery down and just let it sit loosely in the tray. This was also fine except that occasionally when I would make a right turn the battery would lean over and ground out against the frame. This would cause the engine to die and all the lights to go off. The most impressive feature was that sparks would shoot out from under the hood while we continued to negotiate the turn. It looked very cool, especially at night! Once we straightened out, the battery would rock back, the light would come back on, and I would pop the clutch to get the engine going again. Always impressive with my buddies!

Of course, this is a classic case of ‘I wish I still had that car.’ It was tons of fun.