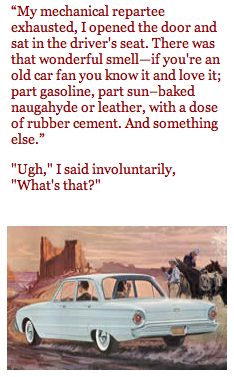 In 1987, I came home from a summer spent with the Canadian Forces Reserves with a big hangover and a bigger cheque.

I was seventeen, and had been itching for a car for quite some time. Since I was 15 I’d been wanting a real classic—perhaps a ’64 Mustang or something like a Bel Air, or even an ancient Plymouth Fury (“Christine” had been a hot movie).

However, when I raised the subject with my parents, the terms that came up most frequently were “compact”, “economical”, and “Honda Civic”. Since the Civic of the time was the smallest, least impressive car on the road, it had a cool factor somewhere around bell-bottom jeans or getting kissed by your mum in front of the entire school. But the spare change from my summer’s pay had a destination. As my buddy Scotty (who was Irish) and I hopped off the bus, he said: “If yez really want a car, you’ll come up—see the ol’ man. He’s about a dozen he needs to get rid of.”

My future was about to change.

Scotty’s dad was called “Red”—even by Scotty, and he did indeed have a half–dozen cars scattered about the yard. But when he heard my price range, he led me straight to the white–topped, gold–bodied 1968 Ford Falcon.

I opened the hood and tried to look as though I knew what I was doing. The engine didn’t look like anything I’d ever seen before. It was long and narrow, instead of the vaguely wedge–shaped thing I’d been expecting. Knowing that the carburator was that thing on top under the roud blue tin box, I peered inside.

“Looks a little black in there.” I said.

“Yeah,” replied Red, “Prob’ly never been cleaned properly. But that’s the beauty of these 210’s—easy to get to, easy to work on.

“Still,” he continued, “It’s amazing—I got her out of a wrecking yard. She’d been run nearly eighteen months without oil.”

I pulled the dipstick—as soon as Red showed me where it was—and stared at pure gold. If I’d been more suspicious (or wiser) I’d have sworn that he’d changed the oil once and never run it since.

My mechanical repartee exhausted, I opened the door and sat in the driver’s seat. There was that wonderful smell—if you’re an old car fan you know it and love it; part gasoline, part sun–baked naugahyde or leather, with a dose of rubber cement. And something else.

“Oh,” said Red, “I used to let the dog sleep in the back seat occasionally. Once you give it a quick clean it’ll be fine.”

It turned out that the dog—a German Shepherd weighing roughly what I did—had been permitted to sleep in the car “occasionally” for almost a year, especially in wet or inclement weather.

The rear fender wells had rusted completely through. On the other hand, a mat of felted mud and dog hair acted as a sort of patch and kept moisture out while not interfering with the passage of cold air.

I looked at the car and considered the money in my wallet. I could insure the car only if he’d sell it to me for $100 less than his $400 asking price.

“I’ll give you two hundred.” I said, looking him in the eye and waiting for a counter–offer.

It was some six hours and roughly $400 in price, tax, and insurance (which was available amazingly cheap for an 18–year-old in 1987) later. I had stopped in at a 7–11 to see if any of the local girls were going to notice my brand–new wheels. The back seat was clean, following the removal of enough dog hair to knit a litter of puppies. I wasn’t certain what my parents might think, but I was already in love with it.
In my mind it was painted a flaming candy–apple red. The seats had been redone in leather, with a huge red maple leaf across the back bench. The straight six engine had been tuned until it purred, and the windows hummed up and down on power linkages.

I pulled to the gas pumps, and was stuffing the rag back into the tank when an older guy approached me. He was ancient—about thirty–five, wearing a black leather jacket, jeans, and boat shoes.

I admitted cautiously that it was.

Inside, I was outraged. Hand over my baby for this Philistine to break apart? Over my dead bodywork! Couldn’t he see how the crimson paint glittered in the light over the pumps? Couldn’t he hear the admiring glances the girls were giving me? I mumbled a polite no. He didn’t stick around, but handed me his phone number, which I threw out as soon as he drove out of the parking lot.

The next day I was on my way to work when the car stopped abruptly and refused to start again, costing me $110 and giving me the rule of thumb I now use on any car older than ten years: Budget 50% of the purchase price for repairs in the first three months. In the next month I replaced most of the underhood electrical components, including the starter, and replaced the same brake wheel cylinder three times.
The brake, it turned out, was exploding because in order to save money I’d started doing my own work. I’d installed the front wheel cylinder correctly, but I’d put the shoes on backwards.

In all, I owned that car for just over two and a half years. It ran on the road for just over twenty–one months. A friend offered to paint it for me, which was why it went into the local high school shop for six months, but he got distracted, leaving me with a grey Falcon with one red and one green (Port and Starboard) fender.

Eventually, a friend who had to move abruptly in the middle of the night—didn’t you have a friend like that? Left me a 2–door Falcon with a seized rear end. I jacked up both cars and attacked the spring shackles with a hacksaw.

After my near–deaths under BOTH cars—a result of my failure to understand something about parking brakes, jack stands, and driveways with 5% inclines, I left the cars (one minus rear wheels) in the parking lot of the motel where I shared a room with three other guys.

It was about two weeks later that I was accepted into the Canadian Forces, with orders to report to training clear at the other end of the country. I felt a hard pang as I realized that I’d have to get rid of my beloved Falcon(s).

Worse yet, I had no money to get them towed to a wrecking yard. And since I’d pulled the axle from the one that worked, neither of them could be moved. When I arrived at home, both cars were gone. Where they had been were some long scores in the pavement and a scatter of broken auto glass.

I was so intrigued that I looked up our landlady.

“How did they get the cars out of here?” I asked.

“Oh it was terrible,” she said accusingly. “He had to break the window to get the cable through. Then he had to drag it up onto his hoist” (Flat–deck towing had yet to be invented, possibly). I argued with her about it so vigorously that she offered to return the portion of my rent which was intended to go for parking. For a moment I paused. She had done me a favour, and was offering me money into the bargain!

But some form of morality asserted itself.

In the end, that car didn’t owe me a thing, and neither did the landlady.