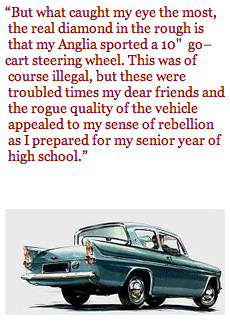 Tony handed me a grease smudged white envelope containing 15 crisp five dollar bills. Reluctantly, I handed him one set of car keys and the pink slip to a 1962 Anglia, my first automotive purchase which had cost me $150.00. (Anglia was a British economy car made by Ford, some of which were sold in the U.S. market.)

It had been on July 22, 1971, when, arriving at my parents house from my summer job at the Shop Rite grocery store, I was greeted by a sight that to this day stirs my deepest emotions: the faded sky blue exterior interfacing with fake red leather interior, leaving me speechless. Bucket seats with “four on the floor” accented with a eight ball on the shifter: bold but not overstated. The inverted rear window had a sculptural quality that seemed to have been fabricated by the same firm that did Stonehenge. Under the hood was a blistering four cylinder engine that produced 36 miles to a gallon of gas and went 0 to 60 really, really fast—though I never timed her.

But what caught my eye the most, the real diamond in the rough is that my Anglia sported a 10″ go–cart steering wheel. This was of course illegal, but these were troubled times my dear friends and the rogue quality of the vehicle appealed to my sense of rebellion as I prepared for my senior year of high school.

As the months went by people heard about this 10″ steering wheel and were very curious, to say the least. Muscle cars and pick-up trucks began to resent that there was this foreign car that was operating under a different set of rules. “Who the hell does he think he is driving around with that small steering wheel?” they demanded. They began to resent the Anglia, distrusting its independence.

But to others it was a beacon of light in a turbulent sea. They rallied around the small steering wheel and never tired of hearing the exploits of enhanced driving capabilities that defied the laws of physics. There were tales of late nights racing through empty country roads in western New Jersey where the vehicle’s operator was driving in a condition that society would have taken an unfavorable view of, if not punitive action. But the Anglia made it back—the 10″ steering wheel held its course, and I can tell the tale.

Tony and his side kick Yazz finished securing the Anglia to the tow-hitch and looked in my direction.

What will become of the vehicle, I asked?

Tony spoke first. “Well, we were thinking of taking her into the shop and make a mini stock car out of her.”

Yazz added that they could race her up in Hazeltown or Nazereth.

“So this,” I thought, “is the fate that awaits my Anglia—the freak show stock car races of eastern Pennsylvania.”

I silently watched them pull away and as I did, I could feel my eyes water and a single tear roll down my grief stricken face. It landed on the sun parched earth of the driveway and disappeared into the depths below. When I looked up the Anglia had turned the corner and was gone.

This entry was posted in First Car, Ford Anglia and tagged Ford Anglia. Bookmark the permalink.