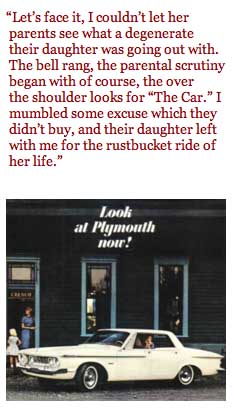 Nothing can match the zero to 60 feeling of getting behind the wheel of your first car, except maybe your first hormonal schoolboy crush and that first beer in the backseat of your own car!

Something about horsepower and a rock n’ roll radio that gives us a rush. Some even fall in love with the Metal Wench from the Motor City assembly lines. Just look what happened to Arnie and his Plymouth Fury in Stephen King’s “Christine,” the wrench wench from hell!

My first car was an old Detroit junker in the form of a Plymouth Valiant, circa 1962. In 1972 I had just gotten out of the Army and met a girl who eventually became my first wife. We agreed to a dinner and date but one problem stood in the way: I didn’t have any wheels but luckily that Friday was payday so I called around to various used car wheelers and dealers. I told them over the phone of my limited but hard earned funds and like magic they had a car to fit my meager money. Over the phone I agreed to get the rustbucket special and after work hopped a city bus to the eastside of Detroit to pick up my dream machine…the dream turned into the automotive version of the Nightmare on Elm Street in under 10 seconds.

It was a powder blue Plymouth Valiant V-100 four door sedan with a 3 speed manual tranny on the column. Pockmarked and with enough rust on her to make a redneck blush, I plopped down my cash and signed the paperwork on that beauty of a beast. Now she was mine. Imperfections and all.

I didn’t notice some of the imperfections at first, I had other more pressing issues on my mind like that evening’s date with a blonde Nordic goddess, but soon they became all too apparent. The front driver’s side wheel was slightly smaller than the other three so it had a tilt to it like a ship rolling over in the water. The AM radio only got one station—thankfully it was rock n’ roll. The heater stayed on so on occasion it would suck the battery dry and the windshield wipers didn’t quite scrape the windshield, but rather waved loosely in the air like a flag on the 4th of July. The seats were slightly slashed, but a blanket took care of that.

The most unique thing that happened on that first journey on the Lodge Freeway on my way home was that the hood flew open and remained in a vertical position making visibilty impossible. I had to pull over to the shoulder and use my belt to secure it and it now wouldn’t close all the way..but it was mine and that’s all that mattered.

Time for the big date. I pulled up two doors down from her house, even though there was ample parking right in front. Let’s face it, I couldn’t let her parents see what a degenerate their daughter was going out with. The bell rang, the parental scrutiny began with of course the over the shoulder looks for “the car.“ I mumbled some excuse which they didn’t buy, and their daughter left with me for the rustbucket ride of her life.

Once the excuses and the promises to fix this and that were out of the way we went to our appointed dinner and date. When we left to go to a movie, the car wouldn‘t start…so we had to flag down someone in a “nice“ car to give me a jump. Now greasy and disheveled we continued our date and eventually I dropped her off. I asked if I could see her again to go out. She smiled, and said “Yes, but next time I’ll drive” We eventually got married a year later and bought a Pinto!

Arnie and his Fury proved that hell hath no fury like a Plymouth scorned and in the movie “Duel” a valiant Valiant did outrun a deranged Peterbilt truck. First Cars are Heavy Metal Motor City Memories…but a Valiant? In one episode of the X-Files they were chasing a bad guy…he had a Valiant of course and they were discussing that he was some sort of advanced alien race. To which Moulder asked, “How technologically advanced can a man be who drives a Valiant”?

Mike Marino is a freelance writer and columnist of pop culture for a number of classic car enthusiast magazines. Check out The Roadhead Chronicles here.