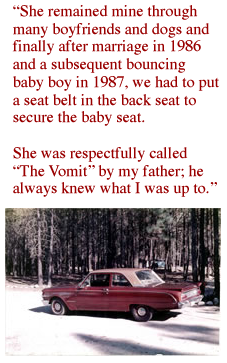 This was my 1963 Mercury Comet, with a V8, 289, three on the tree, and no seat belts. It was a fabulous first car for a sixteen year old teenage gal roaming the backways of the San Francisco Bay Area. She could roar up Mt. Tam, leaving those boys with their toys in the dust.

The Comet was my dad’s car. He had an overseas job, so by default and devise, the Comet and I became fast friends and by college, inseparable. I called its original color ‘desert delerium’ after numerous side trips to Southern Utah, however, after three years on the Santa Barbara coast where I colleged, she started showing signs of rust. My dad, the true car enthusiast that he is, commandered the Comet for a brief period to repaint her.

She remained mine through many boyfriends and dogs and finally after marriage in 1986 and a subsequent bouncing baby boy in 1987, we had to put a seat belt in the back seat to secure the baby seat. She was respectfully called “The Vomit” by my father; he always knew what I was up to.

Alas, in 1993 as our little family moved off to Europe, she was DONATED to some outfit in San Francisco. I pray she still rides with glory. 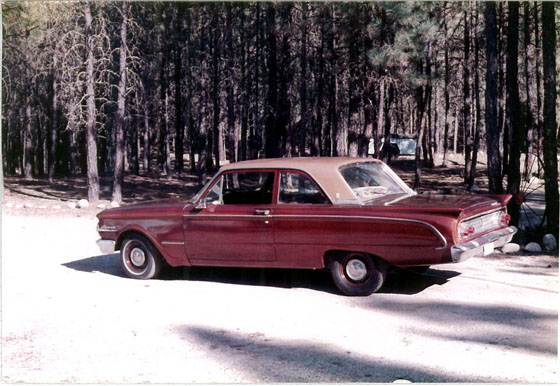