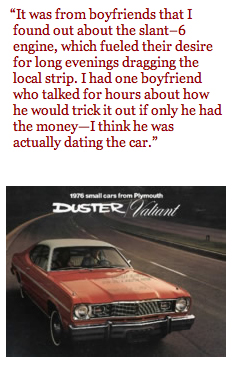 My first car was a candy–apple red 1976 Plymouth Duster. It had been my mother’s car, and no one in the family had thought about its muscle-car reputation. Cars in general were just boxes that got you from place to place and I never knew anything different until the Duster.

I have fond memories of that car, because I credit it with introducing me to boys. At 15, I wasn’t much of a looker, but I suddenly became visible driving around in the Duster. Boys would follow me with their eyes when I pulled into a parking lot. I swear the Duster is what got me my first boyfriend. It was from boyfriends that I found out about the slant–6 engine, which fueled their desire for long evenings dragging the local strip. I had one boyfriend who talked for hours about how he would trick it out if only he had the money—I think he was actually dating the car.

The Duster was a tank, which meant I could pretty much do what I liked in it without fear of injury. I once backed into a black BMW parked on an unlit street, and, pulling forward, tore the entire flimsy fender off. Not a scratch on the Duster. I remember I became pretty much the only patron of the last gas station in St. Louis to sell leaded gas. With the Duster’s thirst for gas, I became well-known at that station.

I left the Duster behind when I went to college, but looked forward to visiting my old friend every time I returned home, sort of like an aging pet. She was always waiting there for me and started up every time without fail, ready for an evening out on the town. If she had a tail, she would have wagged it. At the end, we had been talking about selling her and I went out to turn the engine over. I left it running while I went into the house. When I returned, the engine had died and entire cabin was filled with oily black smoke. We all had a moment of silence, and then she quietly went to that junkyard in the sky.