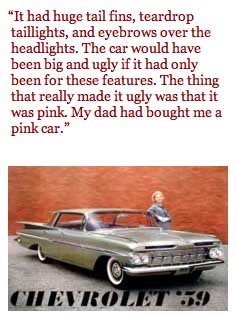 Background: My dad was a career Navy Officer. We moved a lot while I was growing up so I really didn’t have any place I called home. However, when I was in the fifth grade, my dad was assigned to the Navy ROTC Unit at the University of Texas. Those were the best three years of my childhood and all I wanted to do was attend UT in Austin. After graduation from High School in southern California in 1965, I go my wish. I was off to UT and my dad was still in the Navy in California.

Act II: I completed my freshman year in which I joined Army ROTC and a fraternity. Life looked good for my next year. My parents drove to Austin to pick me up at the end of the school year to return to California. My dad was retiring from the Navy and looking for a job. While in Austin, he interviewed for and was selected for a job at UT. This was not at all what I expected. Suddenly, instead of going to college 2,000 miles from home, I was living AT HOME.

A car of my own: Even though my dad and I would be going to UT every day, we had very different schedules. Thus, he decided that I needed my own car. Things were looking better. I was going to college and living at home with my parents but I would have my own car.

The Beast: The next saturday, my dad went out in the morning and didn’t tell me where he was going. He came back to announce that he had bought me a car. I was stunned. I was still in a state of shock when we hopped into his VW Beetle to go pick up the car.

The used car dealership was just south of the river. As we turned in the lot and got out of the car, I began to survey the lot for possible candidates. There was still hope that this would turn out well—there were some keepers on the lot. But my hope was short lived.

The salesman immediately came up to us and said that he would have washed it if he had known that my dad was returning so soon. I had in mind something small like a Ford Falcon. He pointed to our right to a 1959 Chevrolet Biscayne.

Parking was at a premium at UT to say the least. It was said that UT was a five year university, four years of study and one year of trying to find a place to park. This car was huge. My dad had commanded ships that were smaller than this car. It had huge tail fins, teardrop taillights, and eyebrows over the headlights. The car would have been big and ugly if it had only been for these features. The thing that really made it ugly was that it was pink. My dad had bought me a pink car. It took every bit of my self control to not lose it. I took the keys from the salesman, started the car, and drove it back home.

Living with The Beast: The first thing that I immediately noticed about the Pink Bomb (as I secretly called it) was that the seat covers were made of a woven plastic material that was seriously frayed. It was like sitting on a kinder, gentler version of barbed wire. It became increasingly aggressive in the winter time.

The car’s entire list of options was: automatic transmission and an AM radio. All of the gauges worked except the gas gauge. It worked most of the time. I found that when it did not work, I could hit it with my history book to make it work. The doors filled up with water when it rained. Fortunately that was an infrequent occurrence in Austin. The headliner was headed toward Mexico.

My first day at school: Even though parking was at a premium, I parked further away than necessary to try to make sure that no one saw me driving the car. However, there was no avoiding parking it at the fraternity house. I had what would be called today the “Geek car” of the fraternity. Needless to say, this car was not a babe magnet so I borrowed the family car, a 1964 Chevy Bel Aire with air conditioning, for dates.

Paradise Lost: About three months after getting the car, I was driving it home at night when it started to make a whining sound and lost power. By the time I drove it up in the driveway, it was seriously leaking transmission fluid. Before I informed my dad of the situation, I was already having thoughts that the car was dead and I could move on to something better. I defined “something better” as: Practically any other car. My dad had other thoughts. He actually had the car towed and repaired. At this point, I knew there was no God. So close yet so far.

Bonding: After the transmission problem, the car actually became annoyingly reliable. Over the next two years, it did go through a battery and several minor repairs but it got me to and from campus. I never can say that I liked the car but I did develop a grudging respect for it.

The Last Bass Roundup: Between my junior and senior years, two of my ROTC friends and I decided to take a weekend fishing trip out of town. It required that we drive over dirt roads so we took my car since it was the most expendable. We got to the fishing place okay but the muffler was showing signs of wanting to disengage. I used a coat hanger to strap it back in place but the trip out did it in. The muffler got its separation wish as I drove over a large rock that I honestly did not try really hard to miss. Now I was driving a very loud pink car.

Redemption: After my dad saw the car, he made the decision that made him the hero of the situation. He decided to give me my graduation gift a year early—a new car. This time he actually asked me what I wanted. I didn‘t know what to say, so he said that he had in mind a Camero or a Firebird. We went together to the car dealerships. I felt like I was living a dream. We settled on a 1968 blue Firebird. This car had everything: automatic, air, power steering. I suddenly went from having the geek car of the fraternity to having the best car in the fraternity. I still consider the Firebird the best car I ever owned and wish that I still had it.