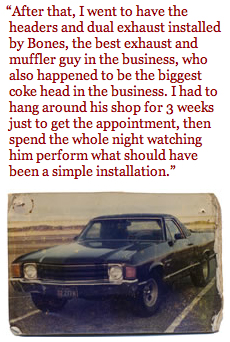 I grew up in the Sunset District in San Francisco, had been enterprising since I was nine, and actually had money to spend on a car. Up until then, my brother and I had been sharing a half–ton pick up as our surf wagon. When I saw the El Camino, I couldn’t buy it fast enough.

I spotted the car parked on South Van Ness and 14th Street, with a For Sale sign on it. It was root beer brown with a black vinyl roof and slotted alloy wheels. It had an 8–way adjustable electric seat out of a Buick sedan. After a quick inspection, I gladly handed over the money, and brought it home. I thought the car was perfect, but of course, once it was mine, I realized there were many ways that I wanted to trick it out, spend money on it, and really make it my own.

The first modification I made was to put curtains in the back windows. I picked fabric out at Britex Fabrics, and had my mother sew up some really cool curtains: green Hawaiian print with black velvet lining. (This made the car feel a little more like a surf wagon, though the guys at the beach thought the car was a little too greaser for a surfer.)

Next, I built a secret compartment behind the seat, to store tools and emergency roadside equipment. I lined the bed with indoor/outdoor carpet for padding to hold my surf boards, and fitted it with a black fiberglass protecto top, clamshell style, to keep my surfboards under lock and key and out of sight. I also fitted it with 60 series tires, gas shocks and oversize sway bars.

All of these modifications came easy, and my girlfriend loved the car. Most projects took only a couple of hours, and I could do them myself. But looking back at it, I think the car had a dark side, and incidents began to occur. First I was pulled over for a USA #1 front license plate, by the notorious Officer Brokebush (a guy who was known in the Sunset District for pulling people over for really stupid stuff, who was incidentally later killed in a helicopter crash.)

After that, I went to have the headers and dual exhaust installed by Bones, the best exhaust and muffler guy in the business, who also happened to be the biggest coke-head in the business. I had to hang around his shop for 3 weeks just to get the appointment, then spend the whole night watching him perform what should have been a simple installation. I was there from 6:30 pm until three in the morning. When I got back to my girlfriend’s house at 3:30 am, she was really mad and thought that I was going out with another girl. After that, she didn’t seem to like my car very much.

The bad car/girlfriend/Dan relationship culminated in a crazy incident on the way to school one day. We were driving along 45th and Anza, and in a fit (about what I fortunately can’t remember), my girlfriend suddenly grabbed the steering wheel and drove me into a parked car, then jumped out of the car and ran off, leaving me sitting there, with a folded hood and steaming radiator.

I had to explain to the cops how a 17 year old (sober) kid in a modified El Camino ended up in this position at 8:00 in the morning. I told them them the old oil in the street story: that the streets were wet and covered with oil, and I slipped and slid the car. They actually bought it.

A surfer buddy of mine recognized the car as he was going by, but of all things, my girlfriend had already shown up, driven by her mother in her ’67 Cadillac convertible and whisked me away. The girlfriend was in tears, all sorry for leaving me like that, and her mother eventually had the car towed to the body shop of someone she knew, and had the car fixed at no cost to me.

I drove the car for a few more months, and sold it on a rainy night to a grocery store owner in the Tenderloin for $2,850. He too couldn’t hand the money over fast enough, and I was hoping the rain would conceal some of the things I considered flaws in the body work. My girlfriend and I hung on for a whole longer, and I bought two cars this time, a ’77 Toyota pickup and a ’67 VW bug, thus starting an exponential trend of car ownership (at last count I have owned as many as 27 different vehicles.) The pickup fit in better at the beach, and the bug was the perfect surf car.