It could never have occurred to me that my first car would one day be the target of  intimidation, but so it was with my 1979 Volkswagen Rabbit. Furthermore, on the day that I bought the car, I could never have anticipated that I would one day pine to be rid of it, just as anyone who eagerly buys their first car rarely considers the possibility that eventually, they will most certainly be better off without it.

The story starts near Hartford, Connecticut, where I had traveled several hours to inspect a used car that I had picked out from one of those weekly automobile catalogs. I had intended to purchase a military surplus jeep (lured by the incredibly low advertised cost of $100), but, having talked myself out of that, yet still motivated by limited economic means, I settled on a Volkswagen. I wanted solid German engineering yet something sporty.

Turning onto a shady lane in idyllic suburban Hartford, I spied the car at rest in a driveway in front of a dark wooden house, the kind of anonymous, minimalist home an insurance executive might own. Despite a few patches here and there, the car looked respectable, even taking into account the window adornments comprised of a thin strip of blue tint along the top, which complemented the car’s base colour, a matte baby blue, as fair and pale as an October sky. A man with thick glasses and blond hair that had the texture of steel wool answered the door.

“How appropriate,” thought I, “A pale man for a pale car.”

“I told my son I would help him sell it,” he explained. After a test drive around the block, I resolutely informed the man that I intended to be the car’s next owner. With guidance from my father, who had escorted me on the trip, we negotiated the terms of sale, and for $1200 the car was mine.

In the year 1989, owning a baby blue 1979 VW Rabbit was by no means a mark of status. It’s not like I went out cruising in this car. I just needed a reliable ride; hence, the Rabbit. Besides, my car and I lived in New York City, where I went to university, at a time when every vehicle in Manhattan bore war scars resulting from the daily battle of life in the city. I had a sign posted on the dashboard that said: “Please don’t steal anything from my car.” The car had no known exceptional qualities: it accelerated at a leisurely pace; the brakes were not always attentive; there was no security system to speak of; and the engine wasn’t even built in Germany – it had one of those California carburetors.

After the initial getting to know each other phase, I longed for the car to distinguish itself – it needed character. So, I painted it. More appropriately, I doodled on it. Studying Art History and English Literature at the time, it seemed right that I should paint poems and draw crescent moons and pine tree silhouettes along the exterior side panels. To this, I added a peace symbol and a daisy. Aside from the occasional road trip to various points along the Eastern seaboard, I didn’t drive the car that much, unless one’s definition of driving includes moving it across the street every other day in order to keep up with Manhattan’s parking restrictions.

Perhaps the car’s friendly illustrations proved too inviting for the many homeless people and heroin addicts who wandered around the area by my apartment on Avenue B and 2nd Street, because I soon discovered that the price of having my car stand out in the lower East Village, meant that this baby blue Rabbit, with its poems and peace signs, was now an overnight hostel frequented by some of these homeless vagrants. It was certainly not a pleasant aroma that greeted me on those mornings when I needed to move the car.

After the Rabbit had been used as a lavatory, I decided that its threshold for abuse had been breached, so I relocated the car to my parent’s home in rural southwestern Connecticut. I put it out to pasture. I think it resented this.It was, after all, a proud urban warrior now reduced to a sissy garden ornament. Before, the car had braved aggressive drivers on tight lanes of traffic in the big city. Now, it could only look forward to my father’s Sunday visits to the supermarket some two miles away. On the rare occurrence when I would summon the car for a modest task, it became apparent that the Rabbit had developed physical ailments – early symptoms of a greater problem that I would later confront during a year of study in Providence. Providence, where the story of my first car comes to an end, where the Rabbit would meet its slow yet ultimate demise.

But first, back in Manhattan, having befriended the then fledging political cartoonist Matt Davies, I encouraged him to use my car as his canvas – and so we agreed that the Rabbit would serve a noble purpose if it wore a caricature of George Herbert Walker Bush on the hood. Inspired, perhaps, by Michael Jackson’s widely publicized accident during the making of a Pepsi commercial, I suggested we set fire to Mr. Bush’s hair – and so Matt obliged. He painted flames, smoldering embers and smoke onto the Presidential coiffure. Rightly pleased, my car now had a burning Bush to boast of.

This did not raise any eyebrows in most parts of New York City, as the President was not a popular man. However, during a journey through eastern Connecticut, I discovered that for the many military personnel stationed by the submarine base in Groton, the adornments on my car were an affront to their tastes. I could discern as much from the hostile looks and comments directed my way from pedestrians as my car waited patiently at stoplights. While parked downtown, one man beyond military age admonished me just as I stepped out of the car. “You should take off that painting.” Having spent the night in nearby New London, I found my car the next morning with two small bullet holes through the front window – the size of large BBs. A hand drawn sign had been tucked under the windshield wiper: “Move this piece of shit.”

A year later, it was in Providence that the true state of the car’s malaise was clearly made evident. It often refused to start, the electrical switches frequently failed, and the California carburetor proved to be ill-prepared for a New England winter (it didn’t handle the summer that followed much better). During these warm months, one had to drive with the heat on at full blast in order to pull the hot air away from the fragile, moody engine, and the car seemed to relish taking unscheduled breathers during stormy weather. The wheel alignment seemed confused, and the steering column was loose. I remember that I impressed my girlfriend at the time by being able to disengage the steering wheel while we drove by the quaint colonial homes along Benefit Street. She looked at me with a combination of glee and terror, and sighed with relief when the ride was over.

Taking the car out on road trips proved many times over to be a misguided, sometimes daredevilish adventure—we most often returned to Providence with assistance from a tow truck. The dispatchers at American Automobile Association came to know me on a first name basis.

Having a part time job, I could no longer rely on my once urban warrior Rabbit to get me to work. It was depressed. Without lengthy cajoling, it wouldn’t even start. It demanded more attention, more care, but I had already said goodbye, and I could no longer feel so much as pity for my one-time companion. I was angry. My car lacked independence and initiative. It couldn’t take care of itself anymore.

And so, one summer day in Providence, Rhode Island, 1992, while drinking an Ortleibs bottled beer with some friends on a wooden stoop outside of 61 Meeting Street, a shirtless art student from RISD slowly walked by and said, “Nice car, dude,” to which I was heard to reply, “Do you want it? One buck and it’s yours.”

“One dollar?” he said, as if waking from a dream.

While he revealed his future ambitions concerning the car, I drafted the terms of sale on a piece of scrap paper, which included a waiver that relinquished me from all responsibilities for the car, and also stated that the buyer accepts the car in its present moribund condition. He signed the document, borrowed my phone to call some of his friends, and when his friends arrived, I watched them push the car silently down the street until the sky blue Volkswagen Rabbit disappeared from view.

Christian Svanes Kolding is a designer and filmmaker living in Brooklyn, New York. Additional work can be seen at www.farmfreshfilms.com 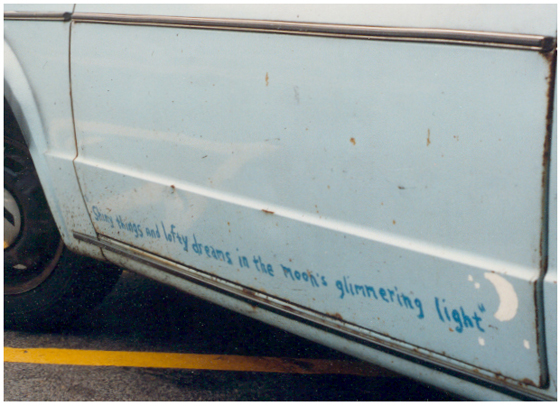 This entry was posted in First Car, VW Rabbit and tagged VW Rabbit. Bookmark the permalink.