During Reagan’s second administration I listened to a lot of the Grateful Dead to escape the horrors of 80’s popular culture. I became obsessed with owning an old Volkswagen, so much so that I carried a toy bug to school that I had painted with the colors that I was going to paint my future car. I was sixteen and I finally earned enough money from selling pot to buy a 1971 Beetle for $280. You can probably guess that I didn’t sell a lot of pot.

The car ran well but it was rusted so badly that it was almost entirely held together by the Styrofoam that a previous owner had squirted into the chassis and between body panels. We slapped a borrowed plate on and drove it home, where I parked it just outside my bedroom window so I could gaze upon it before I went to bed and when I woke up.

I loved that car. In the first week, to tunes emanating from the onespeakered FM radio, I did paint it with a few cans of cheap paint and some foam brushes—blue with maroon trim. I thought it was beautiful, but I now realize that my sense of style was compromised by the decade.

Some of you might remember the big pot drought in summer of 1986. Because of lackluster pot sales, in addition to the fact that my mother thought it was a ‘death trap’ and wouldn’t loan me the money, I never actually registered the car, yet I managed to put over 100 miles on it that summer just doing doughnuts around my neighborhood when my mother wasn’t home and teaching other kids how to drive.

The car was so rusted that the floors would scrape the ground when you drove over a bump and water soaked your feet when you drove through puddles. I eventually took the engine apart to see how it worked. I could never get it running again, so I took everything else apart to see how the rest of it worked. One day I spray–painted it with hippy graffiti and gleefully beat it up with an aluminum baseball bat, though I’m still not sure why. The next day I had it towed to a junkyard that gave me $50 for it, with which I bought a bag of pot.

Now, almost twenty years and four Volkswagens later, I still own an old VW Bug, a 1969 which has its own unique ownership story. Unlike my first bug this one in near mint condition, it is registered and I didn’t buy it with money I earned from selling pot. 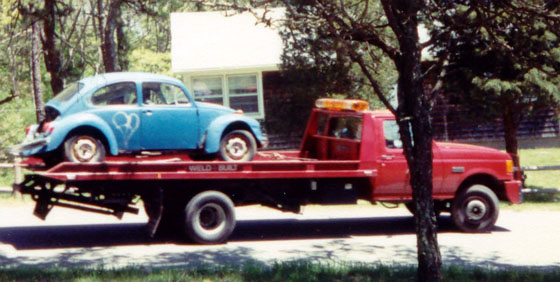