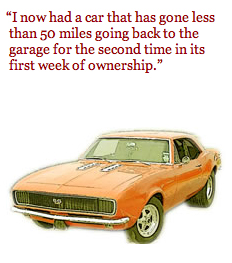 My first car was technically my grandfathers old 4 door Comet—I was in college and basically used it as a means of transportation. After I received my Associate Degree, I started working (a major mistake—I should have continued my education). Money was burning in my pocket and a new car was in my dreams.

My real first new car became a 1969 and one–half hugger orange Chevy Camaro rally sport with a black top and interior. The Saturday came when I was finally going to pick it up. It was a beautiful morning and I was planning to go looking for an apartment that afternoon about an hour away.

I drove home from the dealership and pulled into my side of the garage with the anticipation that later that evening this car was going cruising for the first time. I lived near a town that had a main street that resembles the main drag in American Graffiti, and I was very anxious to cruise Broadway with my shinny hugger orange Camaro. Unfortunately when I backed the car out of my garage I noticed a pool of fluid on the floor. To my dismay it was transmission fluid and not wishing to test my luck, I pulled the car back into the garage and made for a mad dash to the phone to call my salesman at home. He said he would pick the car up on Monday and have it checked over. So much for cruising Broadway.

I got my car back on Tuesday and the next day drove it to work. That evening as I was coming home I noticed an unusual noise. I called my salesman again and he said he would pick up the car the following day. I now had a car that has gone less than 50 miles going back to the garage for the second time in its first week of ownership.

Unfortunately I received a call at work late on Friday that my new car had a cracked fly wheel and they had to order the part. As luck would have it, GM went on strike and it was about a month that my new car sat in the garage of the dealership. I was one unhappy car owner and little did I realize that this was just the beginning of some new car bad luck.

After about 9,000 miles of driving, I was coming home from night school on a rainy and cold November night and got a flat on a normally busy four lane highway. I pulled the car onto a very dark street and dressed in my tan raincoat proceeded to change the tire in the rain and dark. I was dressed in a suit under my top coat and was fumbling around in the dark and pouring rain, thinking that I had all the bolts off (after looking for the jack and jacking up the car.) My hands were already numb and wet. I was finally able to remove the tire and place the spare on it. I was cold and soaking wet. To say I had a few words for this night would be an understatement.

I had this same hugger orange Camaro when I got married. It is tradition in our family to decorate the groom’s or bride’s clothes/house/car etc. on the wedding night. My wedding party, family and relatives decided to target my car. My bride and I thought we would outwit them by taking her car that wedding evening. The next morning we discovered the damage that they had done to my car. White liquid shoe polish with drawings and sayings covered this once beautiful car. “Svec’s Construction company —Erections unlimited” was written on the side. The front hood had what appeared to be two noses facing each other with the words, “Nose to nose and toes to toes and everything goes”.

This car was very special right up to day I traded it in. A couple of accidents, my first born and high gasoline prices pursuaded me to eventually trade it in. I could elaborate on the accidents and a major blizzard I experienced with the car, in which I never made it home that night but did make it to a friend’s house by public transportation only to take a bus the next day and dig my car out from a few feet of snow drift 6 to 8 feet deep.

I still get teary-eyed thinking about this car.